The Arboretum or Grove 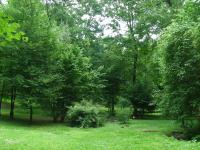 The area located north of the building, which occupies an area of ​​about 1.8 hectares, dates back to 1831, when hills and plateaus were modeled with the aim of creating a scenic effect, in contrast with the part of the garden, characterized by flower beds.

Around 1830 around a hundred tree species were planted and many monumental specimens are still present today, such as the large plane tree which is probably one of the oldest in Turin. Among the most ancient specimens are Fagus sylvatica, Taxus baccata, Ginkgo biloba, Cedrus libani and Quercus robur.

In the "Boschetto" it is possible to follow various paths relating to the species of the original wood of the Po Valley and to the Tertiary species, and a pond with numerous aquatic and marshy species has been rebuilt.

For each species and environment, indications are given on panels of different colors according to the routes.

One area was dedicated to the in vivo collection of ancient "Garnier-Valletti" fruit trees, consisting of 59 ancient varieties of fruit trees, especially pear and apple trees, but also cherry and plum trees. 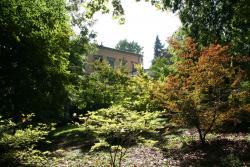